No Jeers for the Barguments App

Just Another iPhone Blog gave a nice little review of the Barguments iPhone App the other day. There were some gripes, of course, and I actually agree. The website isn't very compatible with the iPhone screen, and we'll work on that... But if the commentary about the app itself were translated into symbols, I think it would be an upward pointing thumb joined by an identical upward pointing thumb...
Posted by Coconut Grove Sailing Club at 4:26 PM No comments: 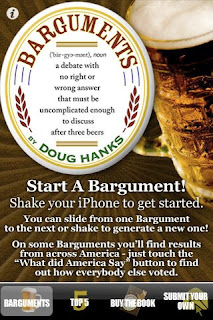 For just 99 cents, you can have 150 new barguments. (Oh, you'll also have to spend about $300 on an iPhone if you don't have one already.) I was playing with the Barguments app this morning and it's fun. Like the book, but with shaking and sound effects. Screen capture to follow. You can click here and buy it for your touch Ipod.
Posted by Coconut Grove Sailing Club at 12:18 PM No comments:

Washingtonpost.com has a little sports Bargument going on: Which NFL rules would you change? One guy wans to revive endzone dances. Headline: Bring back the Ickey shuffle.

I once interviewed Ickey at party when the Super Bowl was in Miami two years ago. I was doing a story on corporate parties hiring NFL alums like Ickey to play golf and schmooze with clients during the big week. I asked him his fee. I think he said $10,000. I then asked if the Ickey Shuffle was extra. It was.

Click here and participate in the Post bargument.
Posted by Coconut Grove Sailing Club at 5:24 PM No comments: 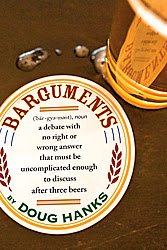